A few of us foodies decided to meet up at The Austrian Club last Saturday as part of the Urbanspoon Foodies Night Out.  I finally got to put a face to some of the recognized names and it was great meeting new people.  The attendees were Bear Hungry, foodstyleaholic, V York, K C Foore + her husband, mspowerbomb, and myself.  We decided on The Austrian Club b/c I absolutely hate driving in the winter, and not knowing if it was going to snow on this night, I was only interested in traveling as far as the N.E.  I will go further once it’s warmer though!

So K and I have a habit of checking out a restaurant’s menu before actually going there and we both decided on the Bauernschmaus ahead of time, which was the farmer’s plate for two, and that’s what we ordered tonight.  Everyone else seem to have ordered schnitzels in different variations while someone did get the lamb.

Here’s what we tried tonight:

I can’t tell if they were baked in house, but they were cool and crusty.  Served with little containers of whipped butter/margarine.

A very tasty salad with potato salad as the main, accompanied by some vinegary cucumber, tomatoes and cabbage salad.  This was very refreshing and we loved how the potato was shaved rather than in chunks.  The potato salad also didn’t taste heavy – unlike the grocery store variety that is heavily doused in mayo.

This was, without a doubt, a ton of food.  K and I were a bit scared when this was set down before us but thought well… we don’t have to finish everything! Here’s a breakdown of each item: 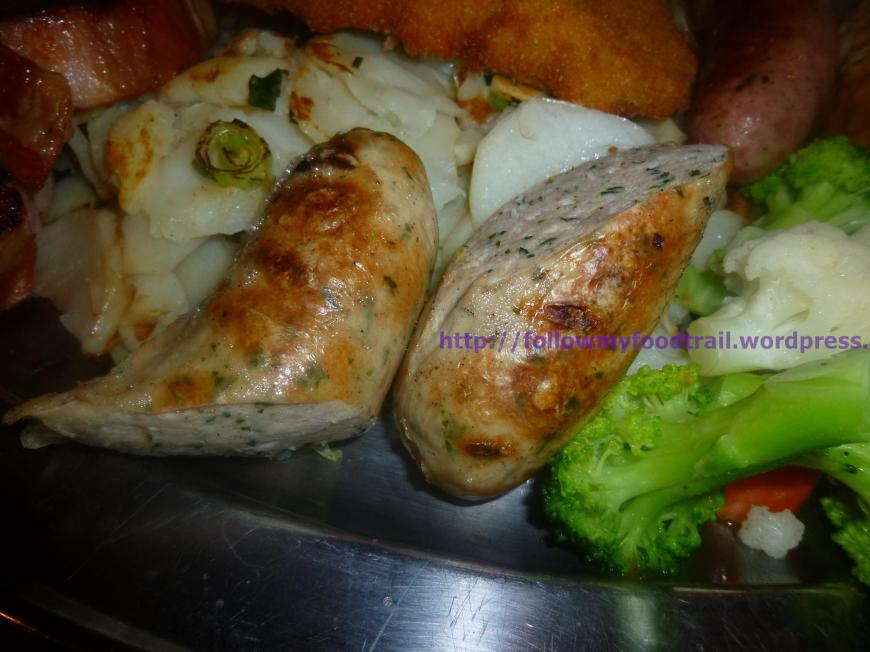 Weisswurst is a traditional Bavarian sausage made from very finely minced veal and fresh pork bacon.

This was my favorite between the two sausages that was served. You can taste how meaty, firm and fresh the meat is – you can also taste that there were no fillers in it!

Bratwurst is a sausage usually composed of veal, pork or beef.

Tiroler Speckknödel (Tyrolean dumpling) are tennis-ball size, round bread-and-flour dumplings made with herbs and smoked bacon.

My least liked of the night.  I felt that the texture was way too spongy and the flavors were bland.  I can see why there was a heap of gravy scooped over it but that still didn’t make this enjoyable.  K said it tastes just like stuffing – I agree. 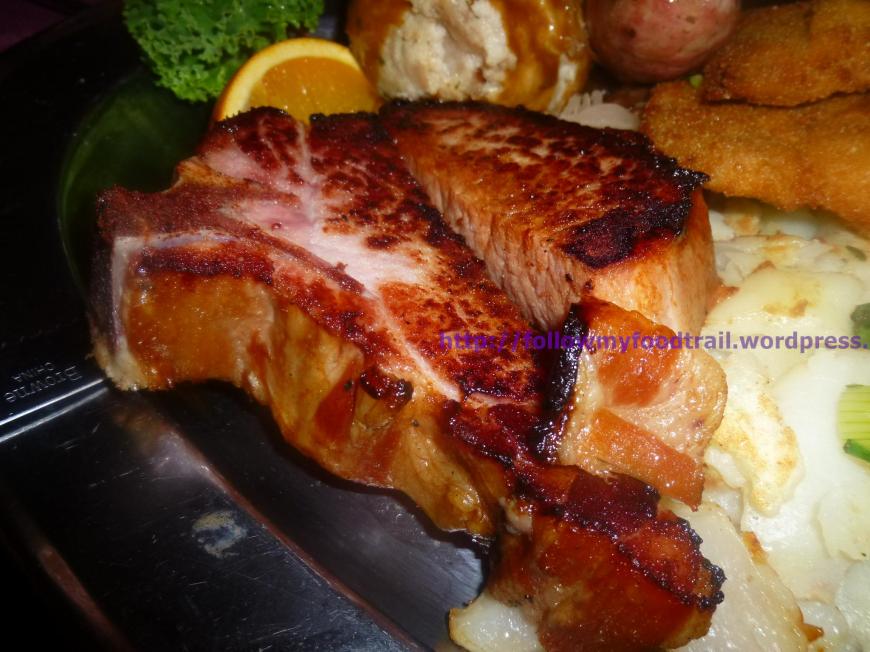 Kassler in German cuisine is the name given to a salted (cured) and slightly smoked cut of pork.

This was very dry and tasted like ham.  I mean yes, I know ham and pork chop are both from the same animal but I’ve never had pork chop that tasted like ham.  It would’ve been more enjoyable if it wasn’t so dry but I guess that’s what you get with smoked meat.  I had a hard time finishing it.

Wiener Schnitzel is a thin, breaded and deep fried Schnitzel from veal.

This was definitely my most liked. Though let’s be honest… deep fried meat? Hello! I’ve never had schnitzels before and didn’t know that you are supposed to squeeze orange juice on it until K C Foore pointed it out to Bear Hungry. I have to say it does add a bit of a citrus twist to it but somehow we were still looking for a dipping sauce of some kind. 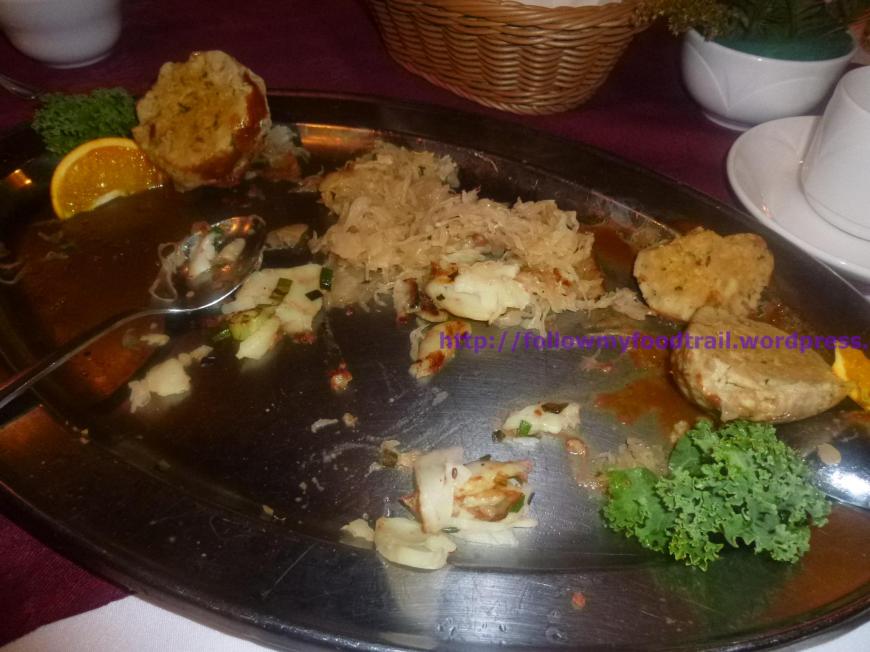 We left a lot of the sauerkraut behind… and the Tyrolean dumpling.  We just didn’t really like them.  We would’ve been happy if all that sauerkraut was vegetables instead! K C Foore’s husband then pointed out… I think you’re supposed to eat the sauerkraut with the sausages.  Totally didn’t know, probably b/c I hardly ever put sauerkraut on my hot dogs/smokies/sausages.  I really did like the pan fried potatoes though – they were seasoned very well, albeit cooked a bit softer than I’d like.

This was shared by four of us since we were all too full but really did wanted dessert.  At first we were worried that the cake might be too dense but this was not the case at all.  The cake was actually light, moist and a bit fluffy.  The chocolate flavor was most predominant in the top layer (like a coating) and was sort of subtle after that.  It’s a tasty cake that’s not too sweet.

It was fun trying out a different cuisine.  Although I have to say typically I just don’t eat this type of food, so while the change is welcoming, I am not used to eat just all meat and potatoes.  Everyone else enjoyed their meals and we had a lovely evening just getting to know each other.  I would definitely eat here again/Austrian food though, that’s for sure!

2 thoughts on “Urbanspoon Foodie Night Out at The Austrian Club”