Hubby drove home from his work site tonight and suggested that I could prepare dinner or we can go out to eat.  Apparently he had wanted me to cook, but since I was given the choice I chose to take an extended nap with my toddler and as a result, we had to go out to eat.  Our original plan was to go to T. Pot but they were so busy that we would’ve had to wait an indefinite amount of time for a table, so we walked over to Smooth Curry instead where it was not busy at all.  Well, nothing wrong with trying a new place, right? The reviews weren’t all bad – it seems to stem mostly around portion sizes and service.

Here’s what we ordered tonight: 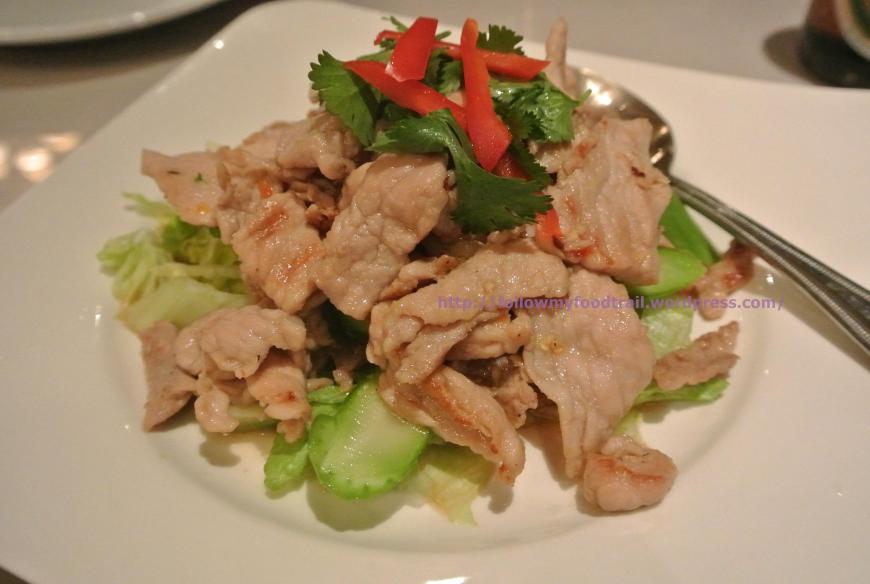 I swear there was a whole pound of pork on this plate… I should say, there was more meat than vegetables, and how often do you get that? Anyways, I was expecting kale leaves, but what we got were kale stems.  I seriously thought it was gai lan.  The other vegetable was lettuce.  The pork wasn’t bad – a bit dry but the spicy fish sauce (I think anyway) complemented everything well.  This dish was definitely the best bang for your buck out of everything we ordered.  To be honest I would’ve preferred less meat and more vegetables.

I ordered this for my toddler b/c he loves noodles.  The soy sauce was light and sweet and the noodles were fried well, but the beef was horribly tough.  Seems like they cooked (or boiled) the beef ahead of time and just tossed it into the noodles when they stir fry it.  Portion was small – my toddler was able to eat the entire plate of noodles himself.

We ordered medium spicy for this but there was no heat in this curry – rather, it was a bit tangy and sweet, but we really liked it – especially with the addition of lychee in it.  The roasted duck was not incorporated into the curry at all – it almost seems to me that they bought Chinese roasted duck somewhere (maybe they roasted it themselves, but it tasted and looked awfully like the one from Chinese BBQ stands) and just mixed it into the curry.  Portion is still quite small (I counted maybe 5 pieces of duck) but this was a good dish.

The prawns were plump and succulent and was coated in a very sweet sauce.  I liked this a lot.  I would love to learn how to make this sauce.  However, portions were yet again small.  There were a total of 9 prawns in here.  I know seafood dishes usually priced higher but it’s just prawns!

This was good enough to eat on its own.  Fragrant, perfectly cooked jasmine rice with hints of coconut – unlike some other restaurants I’ve been to, where they just dump coconut milk into cooked rice and leave it at that.

So… why did I vote “don’t like” for this restaurant? Because service really was horrible.  Our server had such negative energy that I didn’t want to deal with her at all b/c she was rude and blunt.  When she came to take our order, she walks up to our table and says “yup”.  Hm… ok? Also, who asks their diners if the food was ok while clearing the dishes – if I had a problem I certainly couldn’t relay it to her b/c she disappeared after serving us our food.  The other male server was more pleasant – I interacted with him once by asking him to refill my glass and he happily and quickly complied (had to ask him b/c I couldn’t find the female server).  The seemingly “owner” wasn’t any better – was all smiles to all the Caucasian diners – made sure to stop by and talk to every single of their tables but selectively chose to bypass our table.  Talk about… wow.  Even though I did enjoy the food, I’m voting “don’t like” b/c of the crappy, non-existence service that they have chose to provide to me and, well, they have deterred me from returning.