K and I had a few days off and we decided to drive to Edmonton for a couple days.  Being the foodies we are, of course we had to check out some local favorites!

Our first stop as we arrived to Edmonton.  We had no idea this place was so hidden… it is a cafeteria inside a very rundown building.  Had I not noticed the large silver logo on a homemade sign plastered on a very high window I would’ve totally missed the place.  We arrived just as they open and there were already a couple of tables occupied.  More and more people came during our stay so they definitely have a steady flow of business! Not only do they serve Shanghai cuisine, they also had Western food (soup and sandwiches) as well! 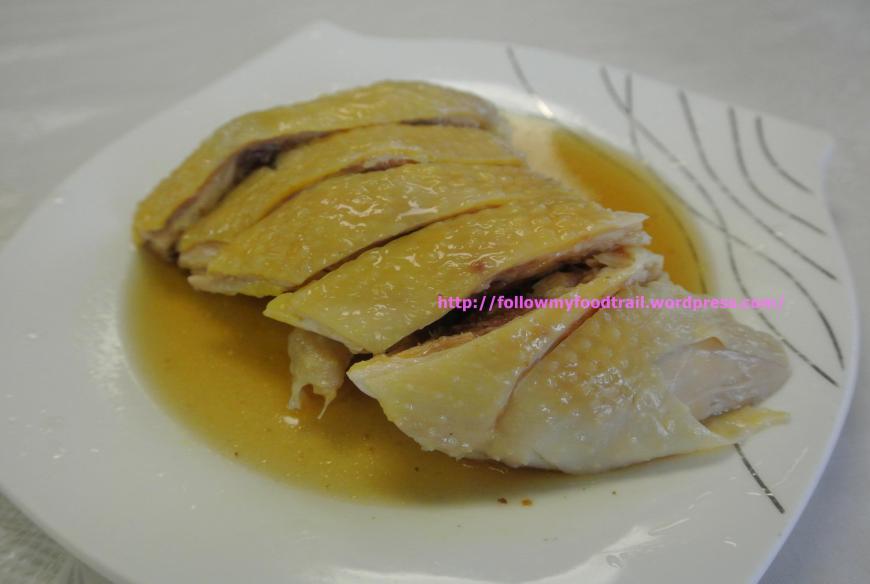 This was decent, but quite pricey for the portion.  The menu did state that it was made with free run chicken so maybe that’s why…? The chicken had very strong wine flavors and the meat was quite tender.

We had wanted the beef one, but they were sold out and we were ok with the pork ones.  I thought these were alright – the skin was a bit thick but not overly doughy.  I was not expecting a burst of soup as I bit into them though! I liked how tender and flavorful the pork filling was.  This was served with dark vinegar for dipping. 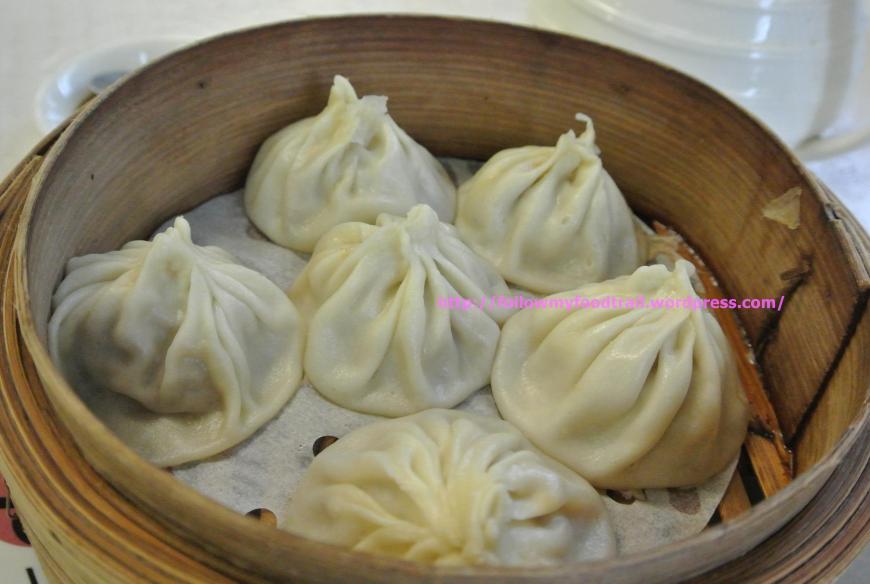 We had very high hopes for this from all the positive reviews but they were not what we had expected.  The two of us have eaten a lot of XLBs (in Asia as well) and noway were these comparable.  The skin was way too thick – it was strangely stretchy although it held the fillings well, but it was just not the right kind! There was a good amount of soup inside the dumplings and the filling resembled the one inside the potstickers.  I just felt like i was eating that allover again except in a thinner wrapping.  I fail to see why this dish is so highly regarded here – K and I didn’t want to eat it anymore after the first piece.

We ordered this for the kiddies and thought it was a decent fried noodle dish.  There was an equal amount of shredded vegetables and noodles here and I was hoping for more noodles.  The oyster/hoisin sauce was tasty and not too salty but the entire dish was very greasy.

As we’ve never tried this dish before we didn’t know what to expect so we can’t say if it’s good or bad.  The duck had some mild salted flavors to it but it wasn’t very strong.  I personally found the meat to be a tad dry and feel there should be a dipping sauce to go with the mantou (steamed buns).  The duck skin was sinfully fatty and effortlessly melted on our tongues.

Near the end of our meal one of the staff brought this over for us to try.  We appreciated the gesture and actually quite enjoyed these pastries.  They were freshly baked and remained hot for a long time.  Buttery, flaky layers of pastry wrapping around a small filling of black sesame, we liked how it wasn’t overly sweet and ended our meal quite nicely.

I do enjoy the “homemade-feel” of the food here but definitely expected more from the two dumpling dishes.  I would definitely return and try their other dishes.  Service was quite good and prices are acceptable.  Do note they accept cash only!

I had high hopes for this restaurant after watching a segment of it on You Gotta Eat Here! K was actually the one that suggested for us to try this place out and as I’ve never had Southern cuisine before, I agreed to it right away.  I mean alligator kebab? Catfish? I love trying exotic things.  While the food was quite decent, what really soured the dining experience was our idiot of a server.  I’m not trying to be mean but she is the sole reason why I voted “don’t like” for the restaurant.  I don’t know if she’s new, nervous, or what, but she was very absent-minded and didn’t seem to have a clue of what was going on.  For example, while I was ordering, not only was I pointing at the corresponding section [starters, main] on the menu, but I actually said, we want [dishes] to start, and then [dishes] as our entrees.  Not sure how but she got the appetizer/main all mixed  around so I had to repeat our order again.  Somehow she still messed up.  We chose the kebab and the dem bones to start, but only the kebab came out.  Then we decided to add the crab cake as an appetizer as well and then that came out.  After finishing those two dishes and waiting some more and still no sign of the dem bones, I was pretty sure she messed up our order so I found her and said, I want to confirm that you ordered the dem bones as a starter.  Her: nope, I didn’t order it as a starter.  Me: well I’m sure that I asked for it as a starter.  Her: well I ordered it as a main.  Me: we didn’t want it as a main because we can’t finish three mains [and three appetizers] between two adults and two toddlers! Where on the menu is it showing the dem bones as an entree anyway?? Her: oh, so should I just cancel it? &$&^$%$%$%$ Can you see how frustrating it was dealing with her? So then she went to the kitchen, came out and actually said oh, I actually haven’t put the order of the bones in.  So they’re making it just now.  And then she put our mains on hold while the dem bones were being cooked so our entrees came out really late.  I don’t even know why we ended up leaving a tip even though it was just 10%.  But the rest of the staff wasn’t any better.  Servers would walk by with the water pitcher, saw that my glass was empty and didn’t offer to fill up until I asked them to.  Starter bread was not given (although we didn’t care for it) and dinner service was really slow. 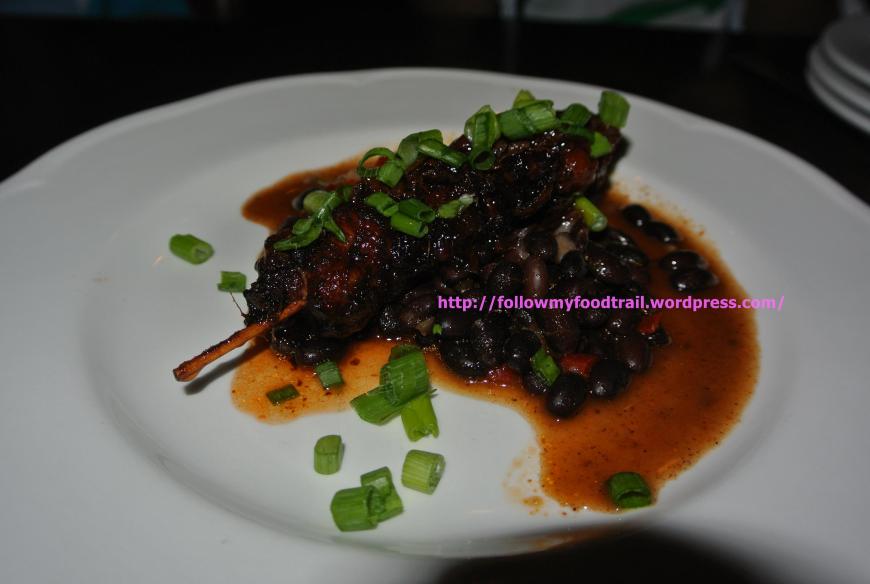 This was the highly anticipated dish and it didn’t disappoint.  The sauce was a bit sweet and sour but went with the alligator meat quite well.  I don’t think alligator meat tastes like chicken – if anything, the texture (toughness) reminds me of pork but the meat here is nicely tender.  There were only four chunks of meat on the skewer – definitely could’ve used more meat for that price but it’s not everyday that we can try alligator.  The black bean mixture was cooked perfectly but I definitely didn’t taste the mango component in it. 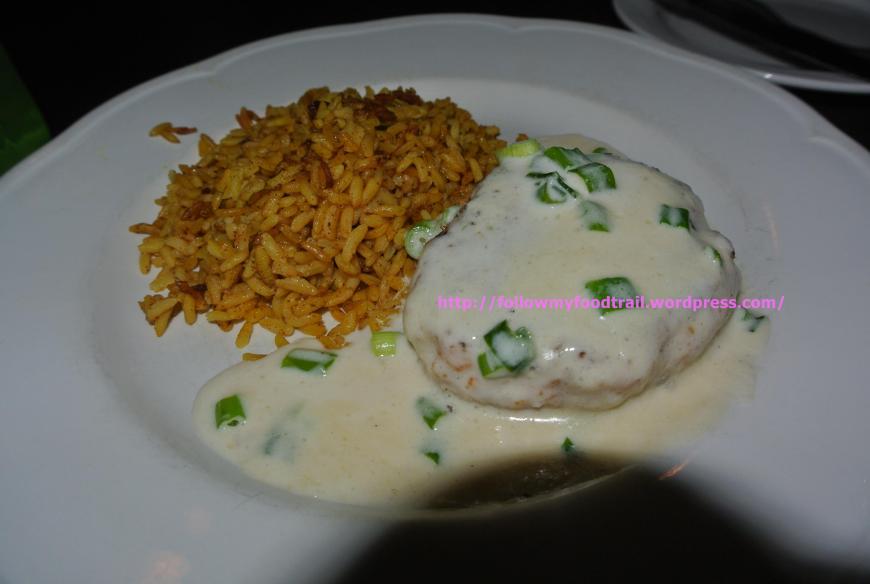 The crab cake was actually really tasty, seasoned just right and the cream sauce was a perfect pairing without being too heavy.  The rice, unfortunately, was pretty bad.  It was bland, soft (as in overcooked) with a lot of hard bits in between.  Like they really scraped the pan clean and just mixed everything in.  It’s not even tasty like what you’d expect in a Korean dolsot bibimbap.  However based on other reviews on US it looks like this is common issue.  We also don’t understand why they would serve rice in an appetizer.

Had we known this was presented the exact same way with the exact same sauce and sides as the alligator kebab, we probably wouldn’t have bothered ordering it.  Even though the alligator kebab was overpriced as it is, at least it was exotic meat.  Rib bones are definitely not exotic and paying $10.95 for three bones just seems steep.  The ribs were ok, the meat wasn’t exactly fall off the bone tender but we were just disappointed that it tasted just like the alligator dish.

This is one dish that made me mad.  Now, based on the menu description above you would not be able to tell that it was spicy.  Yet it was.  And we even told the waitress while we were ordering that it was for the kids.  You would think she’d tell the kitchen to tone down the spice, but I guess that’s too much for me to expect.  My son started eating small bits of it just fine and then part way through he started saying it was spicy.  And then K’s son also stopped eating it.  We were like…? so I had a taste and yes, it was spicy.  It wasn’t evident at first but somehow the spices came through as you dug deeper into the dish, and it tasted like it was the same creole sauce as the blackened catfish.  Since it was already half way eaten we couldn’t even send it back.

This was the other feature on You Gotta Eat Here! and I knew it was going to be spicy, so I braced myself and kept drinking water as I really wanted to try it.  The fish was cooked nicely – it was buttery smooth and flaked very nicely.  I wish it wasn’t completely masked with spices but that is my preference.  The rice was the same poor mixture from the crab cake appetizer so we left most of it untouched.  The grilled veggies were simply buttered and still retained its crispness.

While we mostly enjoyed the food, our dining experience overall was negative due to issues listed above.  Prices are decent for some items while high for others.  Food was tasty but some of the dishes seem to have the same spices/flavors.  Dinner service took way too long (over two hours, and we were one of the last to tables to leave) which was just unacceptable.  Therefore it is not likely that I would return here for another meal.

8 thoughts on “Lunch at Shanghai 456 & Dinner at Louisiana Purchase”