Once in a while I do want to try celebrity chef’s restaurants.  As we hardly eat Southwestern cuisine, Bobby Flay’s Mesa Grill was definitely a must try for us.  I know it was not likely to meet Bobby himself that day, but I was still looking around for him! 🙂

Here’s what we tried today:

An assortment of loafs, but the one that I wanted to eat the most was that corn bread.  It was soft, crumbly, and so flavorful on its own that the butter was not needed.  Since I ordered a sandwich as my entree I refrained myself from polishing off the rest of the bread basket.

As per our server, this was one of their most popular dishes.  I already studied the menu beforehand and prechose this anyway 🙂 I asked hubby to share this appy with me instead of ordering our own b/c I didn’t want to over order.  The tiger shrimp themselves were fresh, sweet, crunchy, succulent – just perfect.  I’ve never actually had tamale before and enjoyed eating the creamy mixture with the corn chowder-like sauce.  This appetizer is different than the usual stuff at other restaurants and I can see why it’s popular – it’s a must try!

Another one of their popular choices.  Hubby was considering steak but changed his mind b/c we still needed to save stomach space for dinner! This burger was fully loaded, and the meat was cooked to about a medium rare.  There was some meat juice oozing out as he was working through it so it made him a tad nervous, but he definitely didn’t get sick afterwards 🙂 I think burgers are generally served medium in the U.S. anyway? Anyhow, he really enjoyed this and yup, it filled him up quite immensely.  He left most of his fries untouched. 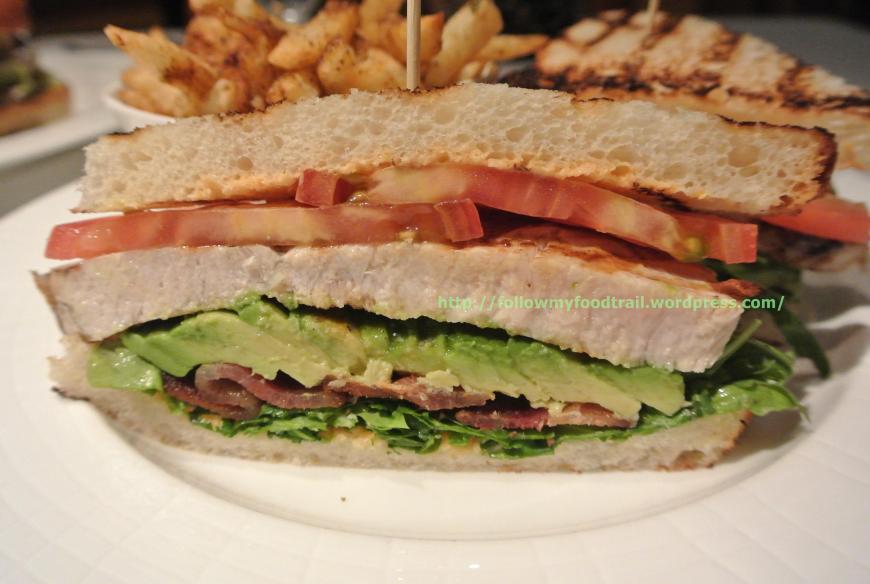 Since I don’t often get to eat swordfish, I went for this other popular choice on their menu.  I do have to comment that while the sandwich looks fully loaded, the piece of swordfish was fairly deceiving in size.  It was about the size of a deck of cards so it might’ve only filled half the sandwich.  I did like the swordfish a lot – flavored very nicely and very meaty.  It didn’t even taste like fish! All of the other ingredients generously filled the sandwich and yeah, I was stuffed after half of the sandwich and ditched the bread.  I also left most of my fries untouched.  Man what is it with my small appetite while I’m on vacation??

We were so stuffed we had to skip dessert, but we really liked the food here.  Service was very good and we felt very taken care of.  Prices are pretty reasonable especially for a celebrity restaurant.  I would love to come back again and try their dinner some other time.