This restaurant was J’s recommendation, and the fact that he posted a picture of live uni on his facebook page which has been haunting me since… has influenced my decision to come here.  It’s a good thing we rented a car because this restaurant was a bit off the strip! When hubby and I arrived, the restaurant was quite empty and my doubts started flowing in… but we were very warmly greeted and ended up having an enjoyable evening, with a couple of minor disappointments.  Our server Mike was simply wonderful and the owner Jaz came out to chat with us as well.  Mike explained that they are a new style Japanese restaurant and they’re really focused on serving some of the best dishes they offer rather than charging you an arm and a leg for a piece of sushi, compared to some Japanese restaurants on the strip.  Couldn’t remember where I walked by, but one restaurant was charging $26 for two pieces of hamachi.  No thank you.

We were having trouble deciding on what to eat when Mike suggested that we give their Omakase a try.  I was a bit doubtful when he said one set menu was enough for the both of us to share.  Really? He said I can always order more food after, but for now, leave it to him! Alrighty. 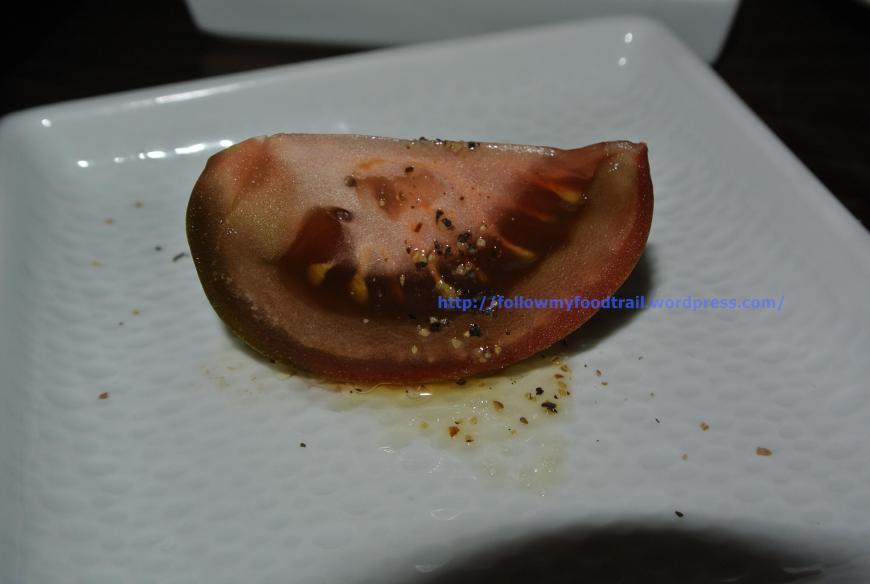 A green tomato wedge! This was simply seasoned with salt and pepper with an oil drizzled on top.  The texture is quite firm though I found the flavors a tad mild – perhaps it has missed its peak flavor mark? 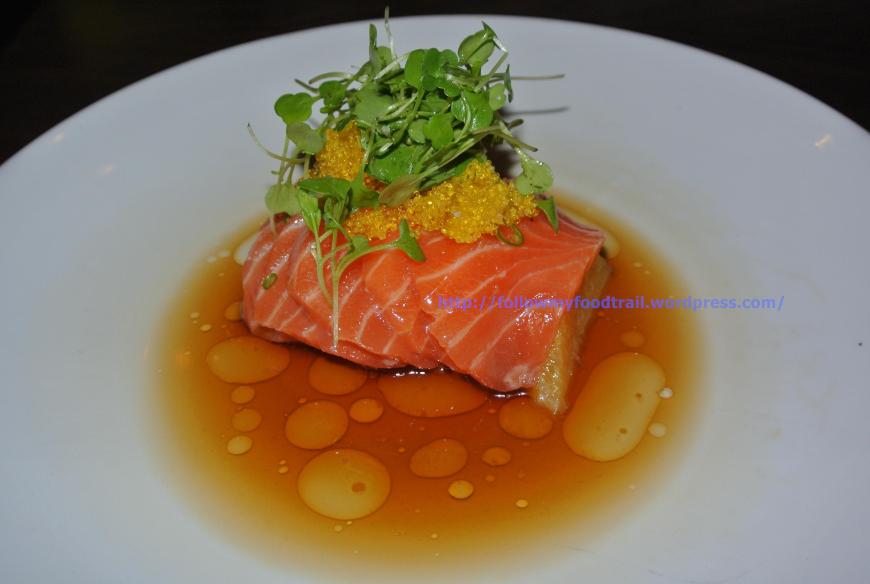 Hmmm yes sashimi! Ultra fresh salmon slices served on orange slices, bathing in an orange infused oil.  This was such a delight to eat due to all the fresh ingredients.  The orange flavors were sweet and refreshing but not overpowering. 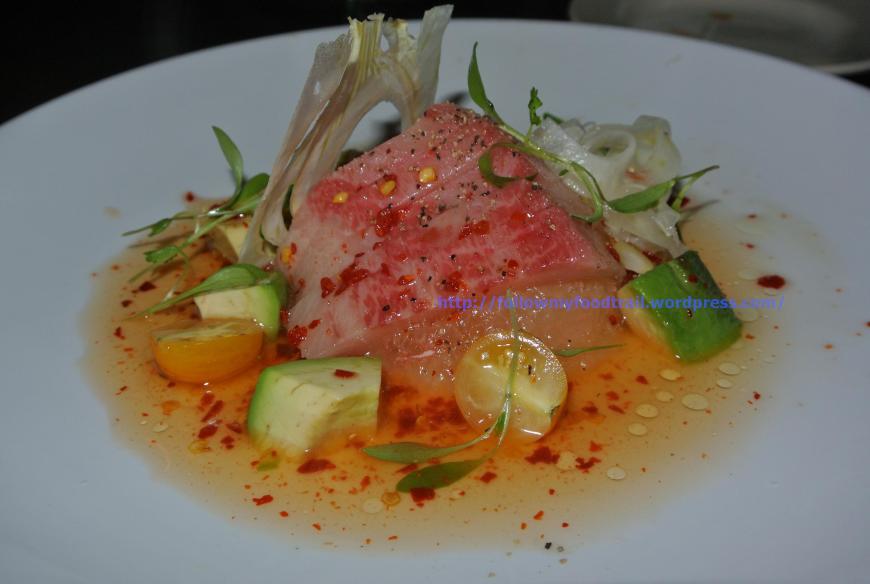 Ultra fresh hamachi slices served on grapefruit wedges, basking in a chili fish sauce mixture.  This is definitely a fusion style dish but it worked quite well. 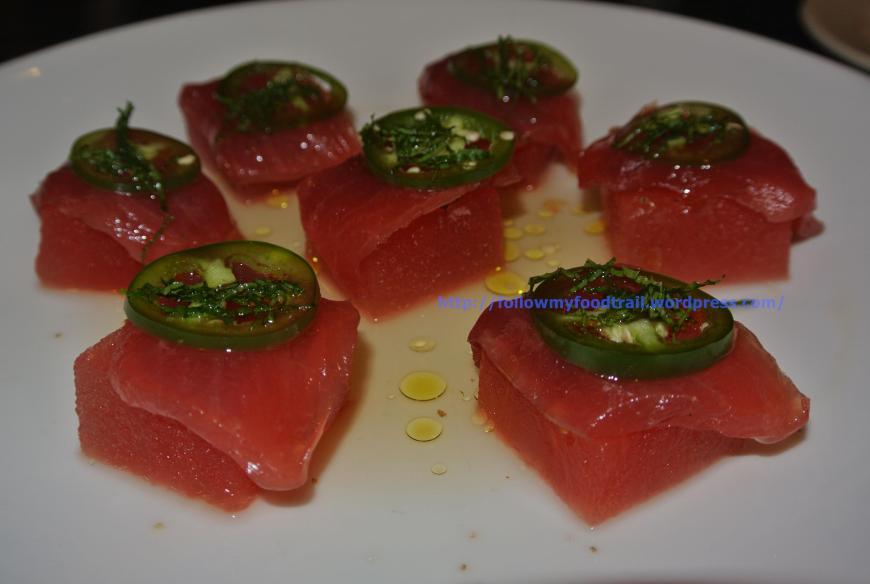 By now we have noticed a pattern – this restaurant likes to pair their dishes with fruits.  Nothing wrong with that – we could always use more fruits in our system.  This time it’s red tuna slices draped over watermelon chunks, and topped with jalapeno slices.  I ate this without the jalapeno since I don’t like the taste of it, although I think it needed a kick as the overall flavors were quite mild.  Yes, I know some foods were meant to be eaten as the Chef prepares it, but if you don’t like something, then you don’t like it! :p 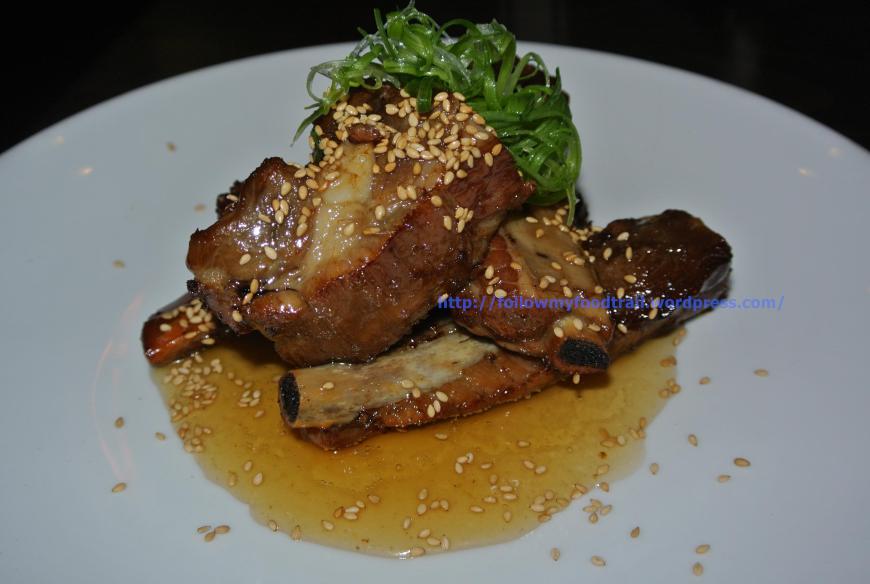 These were so good.  The meat on the ribs were fall-off-the-bone tender, and I love the sweet glaze.  I may have to try and recreate the sauce! 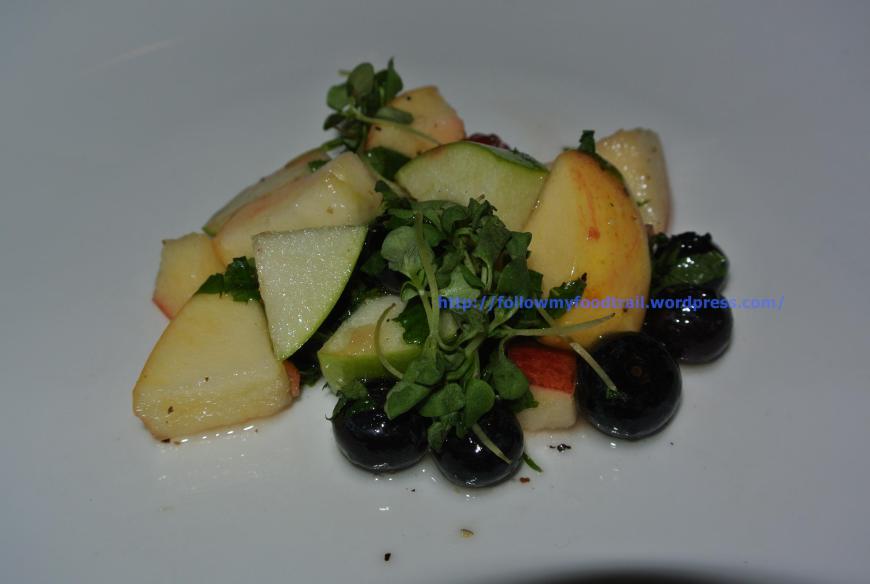 A small salad of apple chunks and berries.  Yay to more fruits! 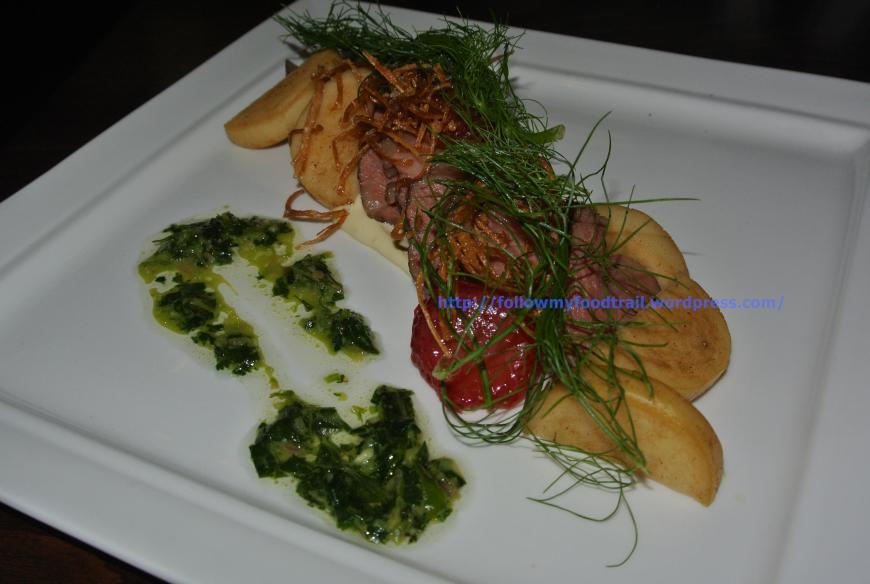 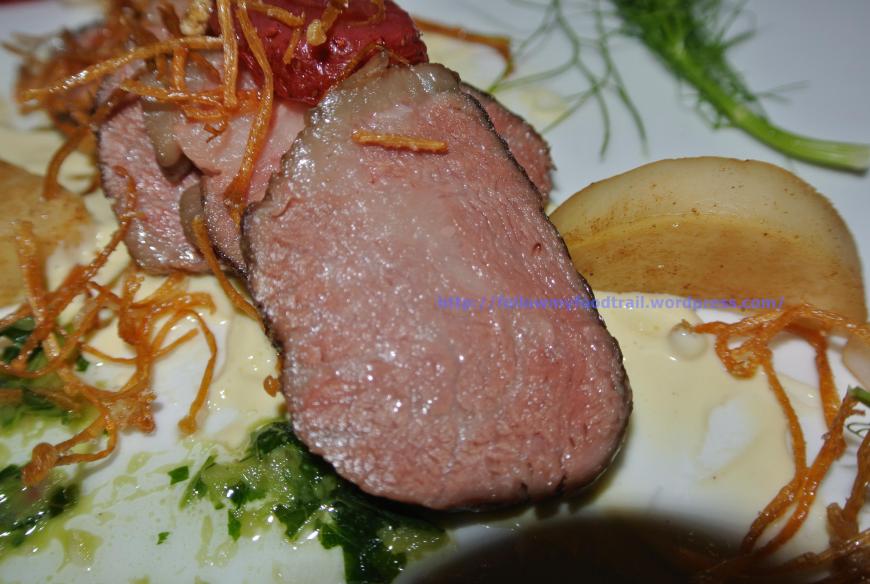 This was my favorite course of the night.  Yonaka serves Australian wagyu, which I think is the closest thing of wagyu you can get outside of Japanese wagyu.  Look at the marbling… omg… the meat was so tender and juicy and literally melted in my mouth.  Makes me want to fly to Kobe and eat some Kobe beef! Hmmmmmm.  I love how it was only lightly seared.  The fried egg puree was ultra creamy… I didn’t think it went well with the wagyu but it was nice with the mushrooms.  The chimichurri was light and mild but paired the wagyu quite nicely without masking the main flavors of the beef.  This is a must try! 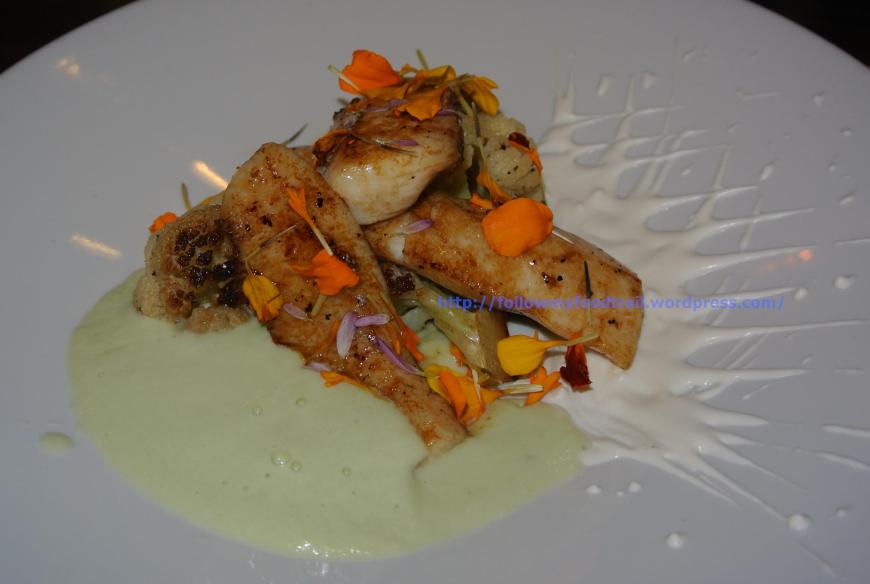 I couldn’t remember what white fish this was, but it was grilled nicely with a buttery and flaky texture.  The cauliflower (I *think*) puree was flavorful, creamy and there was just enough for the amount of fish so it didn’t drown in it.

I’ll mention my first disappointment here.  While I enjoyed all the courses of the omakase, I was disappointed that there was no nigiri course.  As all of the dishes were generously portioned and really, enough to feed two people, I didn’t have a lot of stomach space left to try a bunch of nigiri.  I still wanted the uni though, and maybe a couple pieces of exquisite fishes! 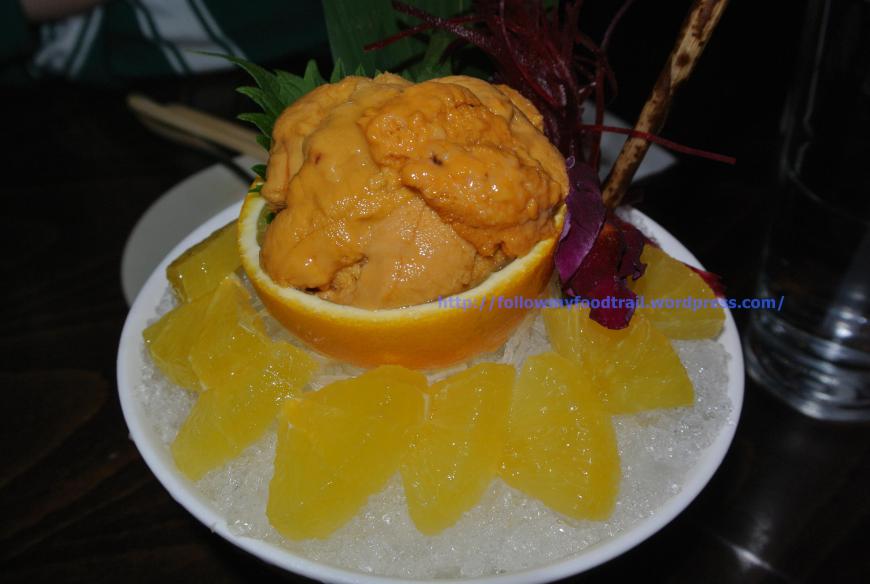 The second disappointment was that they didn’t have the live uni this evening.  I like the golden color on this, but a couple of pieces were too slimy for me.  Overall it was slightly sweet (could’ve been sweeter) and it did taste relatively fresh. 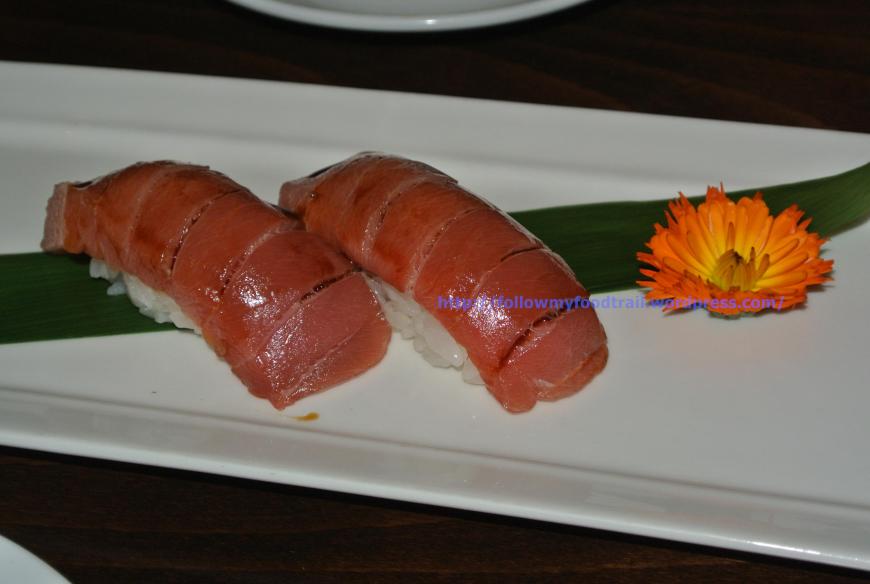 Bluefin tuna is way more accessible and less expensive in Vegas (or just the U.S.) than in Calgary, so we always try and eat some every chance we get.  These were slightly fatty but still quite creamy.  The flavors were a tad mild for me though. 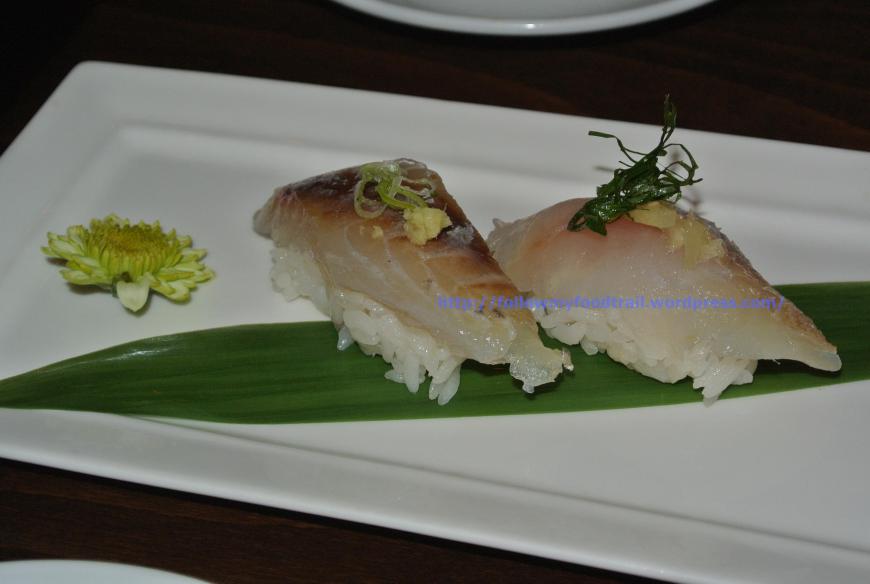 Based on the daily specials list, I asked Mike which one was a must try and he immediately recommended the renkodai.  Hubby wanted to try the barracuda because it sounded cool…? I honestly didn’t even know what a barracuda was (and then I just decided to google it).  Anyhow, I found the texture nicely soft with a hint of sweetness – I definitely liked it. 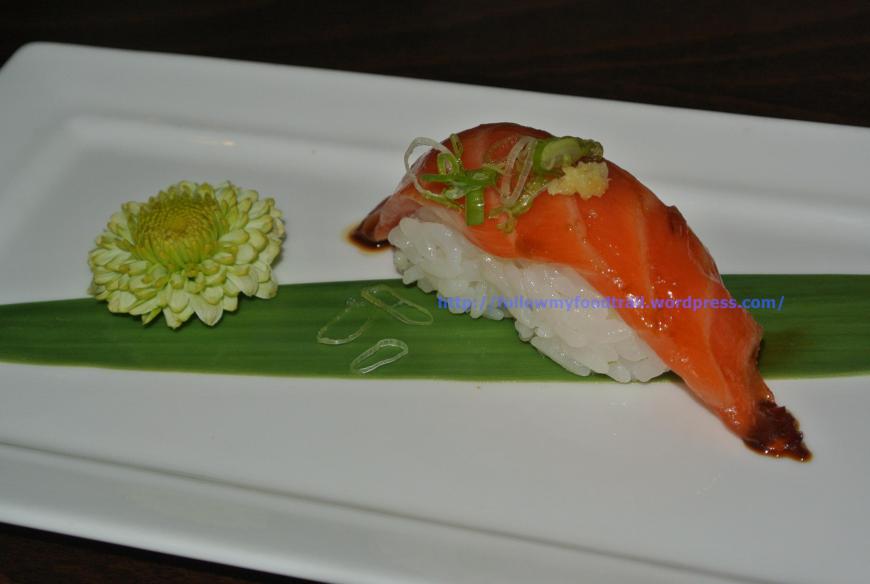 This was hubby’s.  He said it was slightly chewy and different than the other salmon bellies he’s eaten.

I’ve only tried this at Sushi Wasabi in Edmonton and decided to try it again.  The texture is still a tad firm, but it’s also quite meaty and I enjoy the sweet taste to it.

Overall I think this is a fantastic restaurant for contemporary Japanese style dining.  All of the ingredients are fresh and of good quality.  They do a lot of twists on your traditional fare so if authenticity is a huge thing to you, this restaurant may not be what you’re looking for.  You can tell huge efforts are spent on food plating so that’s something to be admired.  Staff are all amazing and helpful and will make your stay enjoyable.  This is definitely a good choice for Japanese dining off the strip if you need a change of scenery!